PEPCO and ECOTIC campaign has finished

During November 5 - December 5, 2016, PEPCO and ECOTIC organized a campaign dedicated to the collection of battery 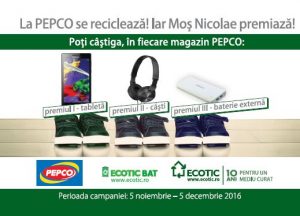 waste and used electric toys in the PEPCO store network in Bucharest. Over 1200 people answered the invitation and handed over the requested types of waste. At the end of the campaign, each PEPCO store designated its winners.

The citizens of Bucharest were informed and encouraged to take part in the collection of the mentioned types of waste; they could hand over used batteries and electric toys at any of the 13 PEPCO stores in Bucharest. Anyone who handed over 4 used batteries or an old electric toy received a voucher and took part in the St. Nicholas raffle. The prizes for every Pepco store were:

Starting with 2016, national WEEE and battery waste collection targets have increased significantly. In this context, ECOTIC continues its efforts to develop new and varied partnerships, in order to reach a larger audience and thus manage to reach its information, education and collection objectives.