The European Union defines the circular economy as "a production and consumption model, which involves the sharing, rental, reuse, repair, renovation and recycling of existing materials and products for as long as possible. "[1], the ultimate goal being to extend the life cycle of existing products on the market. 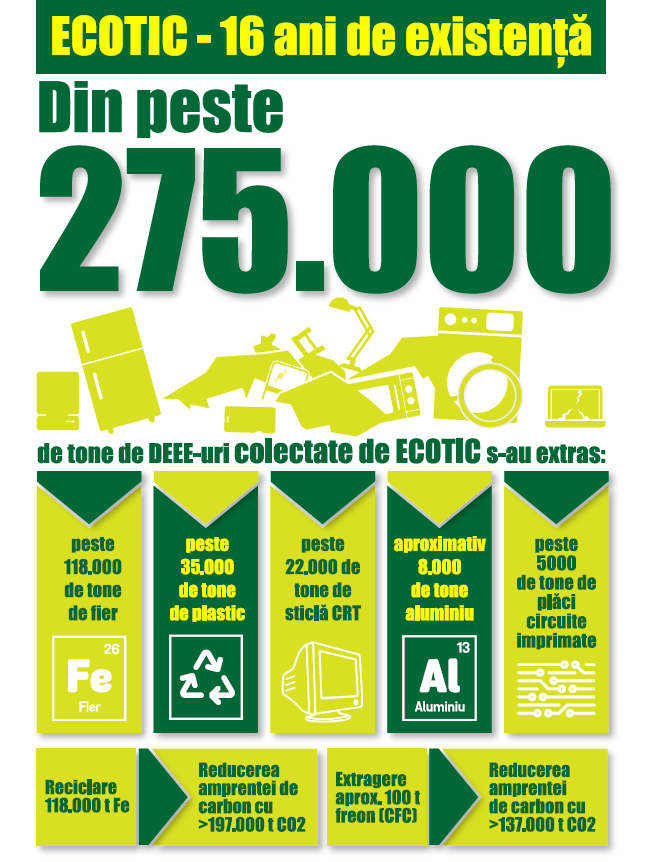 From the point of view of waste management, this model addresses two major problems: on the one hand, the prevention of waste generation through prolonged use of products, on the other hand, the reuse of materials from which an object that becomes waste is made. Basically, the use of the same materials in the production cycle several times.

The concepts promoted by the circular economy, such as reducing waste generation, reuse, green design, among others, directly contribute not only to environmental protection but also help companies to save, create new jobs, become more competitive and reduce total annual greenhouse gas emissions. The European Union estimates that production of everyday materials currently generates 45% of CO2 emissions.[2].

By extending the product life cycle, citizens will benefit from higher quality and reliable items.

ECOTIC makes its own contribution to the circular economy on several levels: supporting the reuse of electronic equipment, collecting for recycling electrical and electronic waste, using secondary raw materials from this waste and supporting the implementation of WEEELABEX standards.

Supporting the preparation for re-use of equipment is an extremely important topic at European level which is supported by ECOTIC at national level through partnership with Borderless Workshops, a social insertion workshop that prepares for the reuse of IT equipment to be later donated to people from disadvantaged backgrounds.

However, ECOTIC contributed together with ASRO and CERC to the transposition into Romanian of the requirements regarding the preparation for reuse of waste electrical and electronic equipment.

All electrical and electronic waste collected by ECOTIC is handed over for recycling to factories that comply with European standards in the field. Both the harmful substances and the raw materials that make up this equipment are extracted so that they can then be reused to create new equipment.

ECOTIC, as a founding member of WEEELABEX (‘WEEE label of excellence’), supports and promotes the implementation of a set of standards at European level throughout the electrical waste management circuit (WEEE), from collection, storage, treatment, recycling, recovery, to the clean disposal of the resulting materials. The aim is to limit environmental pollution and increase efficiency in the recovery of materials resulting from recycling and recovery processes.

The requirements of WEEELABEX treatment standards include the implementation of organizational measures aimed at protecting the environment, monitoring the depollution of waste electrical and electronic equipment, ensuring the traceability of WEEE until the end of waste status, and improving internal processes, including staff security. .

Thus, at the beginning of 2016, benefiting from the assiduous contribution of ECOTIC, materialized in years of promoting WEEELABEX standards and increasing the quality requirements of WEEE treatment contracts, the first operators in Romania obtained WEEELABEX certification: Remat Holding and Greenweee International.