ECOTIC, Recolamp and METRO Cash & Carry organized in METRO Baneasa, between April 02 to 15, 2014 the project „Be Our Hero! Recycle! ECOTIC and Recolamp reward you! ”.
The campaign was dedicated for the customers of Metro Baneasa. The awards given in this project were: 3 LED Samsung TV's and 6 Acer Iconia electronic tablets. In this project over 25 kg of waste of batteries were collected and 1 ton of waste of batteries.Through this project the organizers enabled the public to correctly discard in a friendly environment the WEEE, waste of lighting equipment, except for incandescent 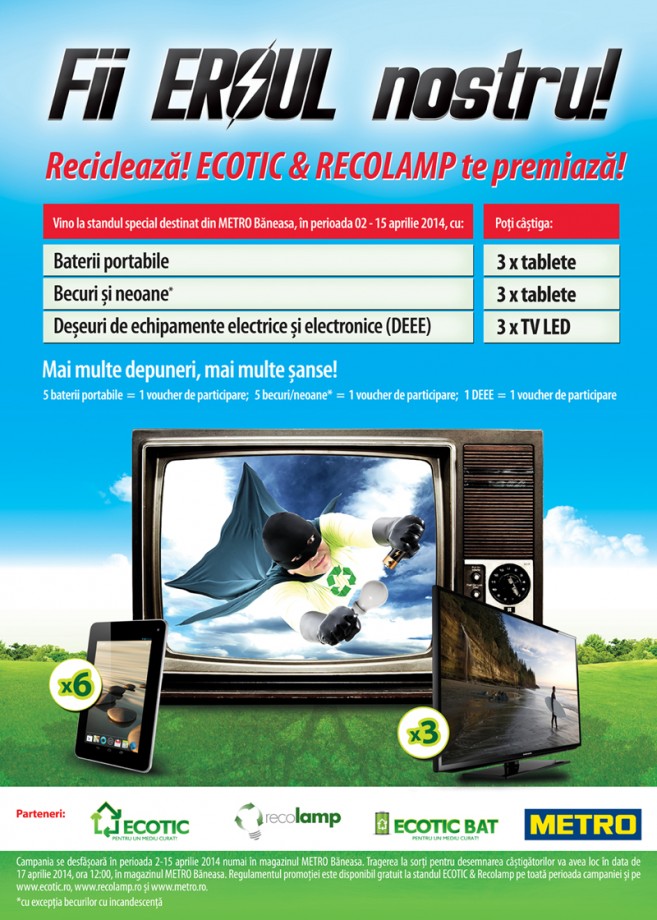 light bulbs, as well as waste of batteries.
Through this campaign, the organizers wanted to remind the population that the selective collection should become a habit for all of us. It is important to know that waste deposited randomly represents a real danger to human health and for the environment.
The primary objective of the campaign was the development of a responsible attitude of the citizens towards waste, especially for WEEE, waste of lighting equipment and waste of portable batteries / accumulators. The awareness campaign included besides the informative and educational side, a practical component, that is a real selective collection of such waste.
The people were able to bring these types of waste only at the designated stand available inside Metro Baneasa, located in sos. Bucharest - Ploiesti, sector 1, Bucharest. In exchange for the handed waste the participants received coupons for the raffle that took place on April 17th at 12 o’clock inside the store. Through this raffle the winners of the campaign “Be Our Hero! Recycle! ECOTIC and Recolamp rewards you! „Were designated. The winners for the tablets were:

The winners for the LED TV's:

Raffle coupons were awarded as follows:
For 1 WEEE handed over at the project stand between April 02-15, one raffle coupon was given.

For 5 used portable batteries and accumulators one raffle coupon was given.

For 5 burned lighting equipment (lamps, neon lamps, etc.), except for incandescent light bulbs one raffle coupon was given.

The more waste brought to the stand, the more chances of winning!

Acting together we can offer us and the future generations A CLEAN ENVIRONMENT!

← The 2014 edition of Afforestation Day Acting together for a clean environment in Iasi! →