Students recycle and win the title of "Doctor Honoris Natura"!

On November 23, 2015, ECOTIC, together with the Polytechnic University of Bu 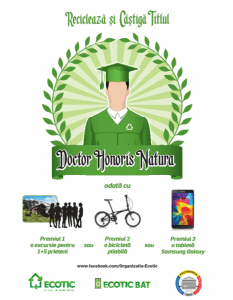 Curesti and the University of Bucharest, started the campaign "Doctor Honoris Natura", campaign aimed at students of the two universities, in order to inform and educate on the correct collection of waste electrical and electronic equipment (WEEE) and used portable batteries and accumulators (DBA).

The campaign will take place between November 23-30, in order to bring to the attention of students the issue of proper recycling, its beneficial effects on both the environment and the community, by educating a healthy civic behavior. Students will be informed and encouraged to recycle using the containers placed by ECOTIC in the headquarters of the Universities and dormitories in Bucharest.

The campaign is a competition and will take place both in the field, through the presence of a team of promoters who will inform and encourage student participation, and on the Facebook page of the organization, where ECOTIC has developed an application that will test environmental knowledge of the participants.

All entrants will participate in a final draw, which will take place on December 4. Three prizes will be awarded for each of the two universities: a trip to the mountains for the winner and five of his friends, a folding bike and a Samsung Galaxy tablet. A total of six prizes will be awarded.

"We know that something exciting is needed when you want to communicate with young people. You need to be dynamic, captivating, have humor or a certain type of emotion. It's never easy. We count on our strong message to make Bucharest students want to have fun, posing as Doctor Honoris Natura, but also to find out important information about what a student can do about waste recycling and environmental protection. ” Valentin Negoiță - President of ECOTIC.

"Doctor Honoris Natura" is part of the ECOTIC programs and campaigns for educational institutions, in a continuous effort to bring messages of awareness among the younger generation.