Recycling Station, the itinerant ECOTIC campaign, dedicated to the collection of used electrical and electronic equipment from rural areas, continues its route. After crossing 2017 counties in 2018 and 8, informing approximately 230.000 people and collecting 120 tons of WEEE (waste electrical and electronic equipment), and in the first part of 2018 he visited Hunedoara county, the "Recycling Station" Campaign makes a new stop, this time in Botoșani County.

The campaign “Recycling Station, in 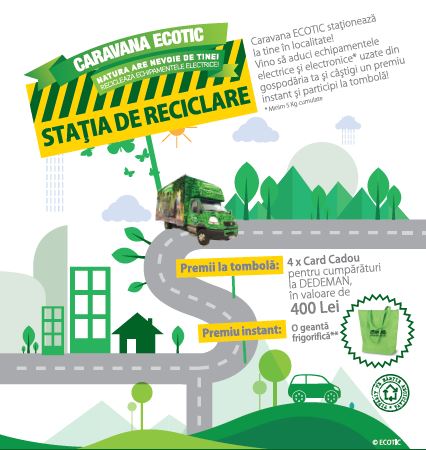 partnership with ADI ECOPROCES BOTOSANI and ECOREC RECYCLING, will stop in Botoșani county, in two stages: May 16-30 and June 15-29, during which the people of Botosani will be able to bring and hand over for recycling electrical and electronic equipment (WEEE) to the ECOTIC Caravan , mobile collection point.

This first stage of the campaign in Botoșani County will take place according to the following schedule:

To encourage the correct delivery for recycling of used electricity and electronics, each resident who will bring to the ECOTIC Caravan at least 5 kg of such waste will receive an instant prize and will participate in a raffle with attractive prizes consisting of gift cards.

Taking home bulky equipment (TV, refrigerators, washing machines) is free based on telephone appointment at 0732.148.550. The appointment will be made on the first day of the campaign in each locality.

"Recycling Station" is the ECOTIC campaign that pursues this goal mainly in rural areas. Together with the local public authorities and ADI Ecoproces Botosani ECOTIC informs the inhabitants of several localities in each county visited on the need to collect WEEE and provides a mobile collection point - Caravan ECOTIC - where this waste can be brought and handed over for recycling.