This autumn, JYSK is awarding initiatives for the proper recycling of waste electrical and electronic equipment and waste batteries.

ECOTIC and ECOTIC BAT, in partnership with JYSK Romania, start on September 1 an awareness project on the correct delivery of waste electrical and electronic equipment (WEEE) and waste batteries and accumulators (DBA).

The campaign will take place in all JYSK stores in Romania between September 1 and December 31. Thus, JYSK customers who will hand over a number of 5/10 waste batteries and accumulators or 5/10 used electrical and electronic equipment will be rewarded on the spot with household items, batteries or toys. 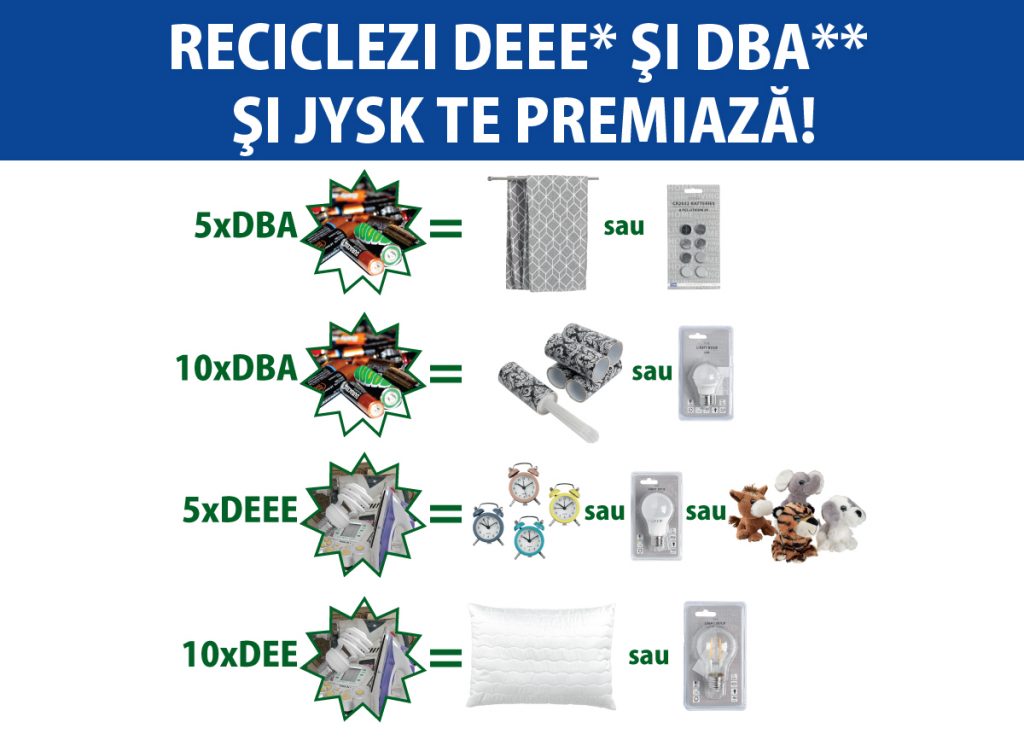 The aim of the campaign is, on the one hand, to inform and make customers aware of the importance of separate collection of waste electrical and electronic equipment and waste batteries and accumulators and, on the other hand, to develop a responsible attitude towards waste, in particular compared to WEEE and DBAs.

Alex Bratu, Country Manager of JYSK Romania and Bulgaria: “JYSK is an international company with over 2800 stores, with a lot of suppliers that produce a wide range of household products. We try to minimize our impact on the environment, through responsible policies and the use of sustainable materials. Recycling is part of our efforts to act responsibly, and this fall we will try to raise awareness of the importance of recycling and facilitate the recycling of electronic products and batteries, both among our customers and employees.

"Waste electrical and electronic equipment or used batteries no longer serve their purpose in the household, so if you bring small WEEE, for example chargers, LED bulbs, lamps, electric toothbrushes, irons, receivers, cameras and so on but also batteries, accumulators or laptop batteries at any of the JYSK stores participating in the campaign, these will be replaced with new batteries, lint rollers, light bulbs, towels or toys ”says Diana Trifu, ECOTIC communications manager.

Romania, as an EU member country, has the obligation to reach a target of 45% collection of waste electrical and electronic equipment (WEEE) by 2020. In this regard, ECOTIC and ECOTIC BAT, together with producers, continues awareness efforts among the population.

JYSK is one of the leading furniture and interior decoration retailers in Europe. The first JYSK store was opened in Denmark in 1979. Today, JYSK operates in 51 countries, has over 24.000 employees and over 2900 stores. In Germany, the group operates under the name Dänisches Bettenlager - and in the rest of the countries under the name JYSK.
The company is owned by the family of its founder, the Danish businessman Lars Larsen, who has other companies in his portfolio, with an annual turnover of 4,7 billion euros. JYSK's turnover is 4,1 billion euros.
JYSK entered the Romanian market in 2007, with the inauguration of the first store in Oradea. The network currently has 90 stores in Romania.

ECOTIC is the first organization of manufacturers and importers of electrical and electronic equipment (EEE) in Romania, founded in 2006, which provides for free containers for the separate collection of waste electronic small equipment and batteries, as well as the free collection of bulky equipment from the company's premises or from home. For more details send an e-mail to logistica@www.ecotic.ro

← Campaign Take care of your city! - Topoloveni announces its winners ECO JOURNALISM FOR A CLEAN ENVIRONMENT: 5 simple things for a cleaner environment →