The "Recycling Station" stops in Botosani

Recycling Station, the itinerant ECOTIC campaign, dedicated to the collection of used electrical and electronic equipment, continues its route in Botoșani County. After crossing 2017 counties in 2018 and 8, the "Recycling Station" makes new stops, starting with the Municipality of Botosani, and continuing its journey in 5 other communes. 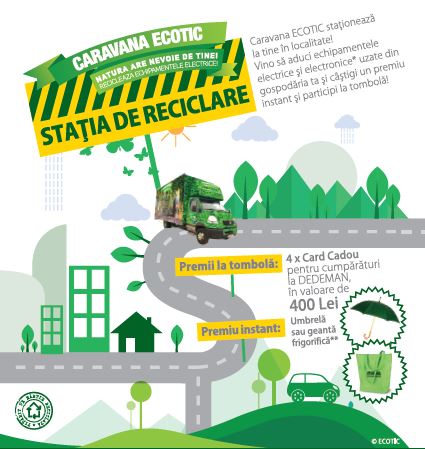 The “Recycling Station” campaign, carried out in partnership with the Ministry of Environment, Botoșani City Hall, Broscăuți, Curtești, Saveni, Sendriceni and Ștefănești communes, APM Botoșani, ADI ECOPROCES Botosani, ECOREC Recycling and URBAN SERV, will stop both in Municipality B as well as in the 5 communes, between June 12-30. The people of Botosani are encouraged to bring and hand over for recycling electrical and electronic equipment (WEEE) to the ECOTIC Caravan, a mobile collection point.

For the correct delivery for recycling of used electricity and electronics, each inhabitant of Botoșani Municipality who will hand over waste of at least 10 kg accumulated and the inhabitants of communes who will hand over at least 5 kg accumulated of such waste, will receive an instant prize and will Participate in a raffle with attractive prizes consisting of gift cards.

This second stage of the campaign in Botoșani County will take place according to the following schedule:

The collection schedule is Monday to Friday between 9:00 and 17:30.

Taking home large equipment (TV, refrigerators, washing machines) is free of charge based on telephone scheduling at phone numbers 0231.517.007 and 0747.081.027 for the Municipality of Botoșani and at the phone number 0732 148 550. The appointment will be made on the first day of the campaign in each locality.

"We try to sensitize the inhabitants of Botoșani County on the importance of separate collection of recyclable waste, through information / awareness activities, encouraging them to selectively hand over waste that can be recycled, especially waste electrical and electronic equipment," says Mr. Ovidiu Aparaschivei, Director of ADI ECOPROCES BOTOSANI.