Starting WEEELABEX procedures by waste operators from the ECOTIC system

WEEELABEX (WEEE Label of Excellence) is a project developed by the European Commission in partnership with WEEE Forum. This project aims to implement a set of standards at European level on the entire circuit of waste management of electrical and electronic equipment (WEEE), from collection, storage, treatment, recycling, recovery, to the non-polluting disposal of the resulting materials. The aim is to limit environmental pollution and increase efficiency in the recovery of materials resulting from recycling and recovery processes.

Among the requirements imposed by WEEELABEX treatment standards are the implementation of organizational measures aimed at protecting the environment, monitoring the depollution of waste electrical and electronic equipment, ensuring traceability of WEEE until the cessation of waste status, and improving internal processes, including ensuring staff safety. .

- sending the Declaration of Intent to WEEELABEX OFFICE

- preparation of the final report by the audit team and their recommendation for the listing or not of the operator in the List of certified WEEELABEX operators.

In the audit process for WEEELABEX certifications, the WEEELABEX auditor from the ECOTIC team has a direct involvement: Diana Grosu. The certification of the treatment operators from the ECOTIC system occurs as a result of the effort made, for many years, by the entire ECOTIC operational team. It imposed and assumed the transposition of the WEEELABEX requirements, at contractual level, which meant more and more stringent requirements to the operators performing WEEE treatment operations.

„SC REMATHOLDING Co SRL Bucharest, with the support and expertise of the ECOTIC Association, has started a program to implement the European standard WEELABEX in the processes of collection, sorting, temporary storage, treatment, recycling, recovery and ecological disposal of waste electrical and electronic equipment , thus aligning ourselves with European requirements and thus contributing to reducing pollution in this area and, implicitly, to reducing the intensity of climate change and global warming. " - said Mr. Nicolae Manole - economic advisor.

The effects of certification mean more attention to the fetus 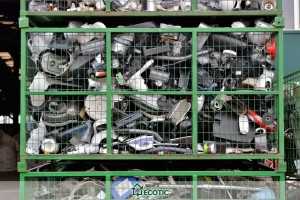 of the extraction (separation) of hazardous materials, substances and components in order to recover, neutralize and eliminate their pollutants, safer procedures for employees and a much stricter record system, thus ensuring the traceability of waste and fractions resulting from treatment their.

By the end of 2017, all WEEE treatment operators in the ECOTIC system will follow this certification process.

The Ecotic Association aims that, by the end of 2017, all WEEE treatment operators in its system follow the audit and certification process in accordance with the requirements of WEEELABEX standards.

← Mobile factory for the recovery by hydrometallurgical processes of precious and critical metals from WEEE ECOTIC kicks off the second edition of the "ECO Days in Your School!" Campaign →