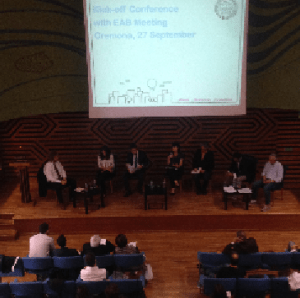 we produce, what we consume and to ask ourselves what is our economic and coexistence model ”(Gianluca Galimberti, Mayor of the Municipality of Cremona).

Urban_WINS is a project funded by European funds, which runs for a period of 3 years and will develop and test eco-innovative strategies for waste prevention and management in 8 pilot cities in Italy, Portugal, Romania and Spain.

On 27 September, more than 50 participants - including decision-makers, industry representatives, public authorities, schools, local businesses and city dwellers - from all 6 countries represented in this project ( Austria, Italy, Portugal, Romania, Spain and Sweden) participated in the Launch Conference.

Also, representatives of the cities and localities that will participate in the European Consultative Council (Gothenburg and Santiago de Compostela) and the cities that will be the subject of the pilot sample and study phases were present at the event: Venice Metropolitan Area, Pomezia Municipalities, Albano Laziale , Monterotondo.

The Mayor of Cremona, Gianluca Galimberti, spoke at the opening of the conference and stressed the importance of cooperation between cities at European, national and regional levels. "We are living in a difficult time for Europe. We need to build relations between European countries and territories through the projects we will carry out in the future. We are doing this now, starting with our own city, through the UrbanWins Project. We will have to imagine our cities as huge social, cultural and economic laboratories, and this is also possible thanks to the UrbanWins Project. The scope of the UrbanWins Project is the research and analysis of data and options. The theme of the UrbanWins Project is crucial. Talking about waste does not only mean talking about waste, but to discuss who we are, what we produce, what we consume and to ask ourselves what is our economic and coexistence model ", said Mr. Galimberti.

Next, the members of the UrbanWins European Advisory Board had the opportunity to get acquainted with the objectives of the UrbanWins Project and the concept that governs this project. Leonardo Rosado (Chalmers Technology University) explained how cities are a key driver of the economy and sustainable development in the future. These are the places where consumption takes place: cities "eat" resources, which is why we must look at them as living organisms and strive to change the way of urban life and close the cycle of using material resources.

Mara Pesaro (Comune di Cremona) explained why the UrbanWins Project is a challenge and highlighted the importance of identifying and involving as many stakeholders as possible.

During an interactive session, the members of the European Advisory Council, including representatives of the Catalan Waste Agency, the Portuguese Environment Agency and the Romanian Environmental Fund Agency, had the first opportunity to meet with project partners and have an overview of UrbanWins Project activities.

Thanks to the participation of a representative of the Delft University of Technology, the first synergies were established with the project REPAiR -Resource Management in Peri-urban Areas: Going Beyond Urban Metabolism, also funded by the Horizon 2020-Waste-2015 program.