And the little ones do great deeds! a II a editie

ECOTIC BAT organized thethe second edition of the ecological education campaign "And the little ones do great deeds!" In needlesst project participated over 150 kindergartens from all over the country, over 7000 little ones found out the secrets of battery recycling and who handed over 750 kg of batteries.

ECOTIC BAT identified the need for educational classes on selective collection in general and waste collection of portable batteries and accumulators (DBA) in particular, in kindergartens in Romania. The project 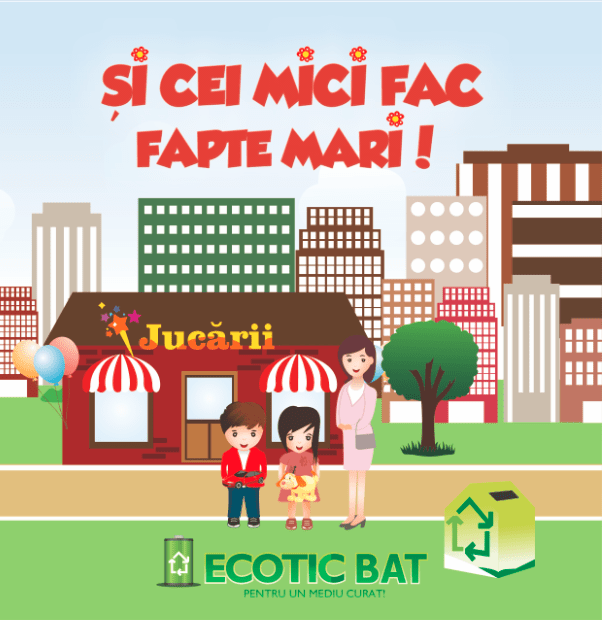 came as a natural response in the context of supplementing education with information related to ecology and environmental protection.The aim of the campaign was to educate the young generation in the spirit of selective collection of DBA through innovative means, ready to arouse interest little ones aged between 3 and 7 years.

The information to the little ones was made through the educators who previously received a didactic material that offers them the knowledge base necessary for the development of an eco-educational class. The project brought to the fore a premiere in the field of awareness made by ECOTIC BAT  by creating: the first animation that aims to present the DBA collection and recycling flow, in a friendly way, adapted to the children's age!

The over 150 kindergartens benefited from brochures specially created for children, through which they easily assimilated the information related to the selective collection of DBA. Also, the parents of the children were informed through informative leaflets about the benefits of selective collection of DBA, but also of waste electrical and electronic equipment (WEEE),  and containers destined for DBA collection were made available by ECOTIC BAT, to all kindergartens registered in the project.

The press release sent at the beginning of the project is available there.

The press release sent at the beginning of the project is availablewalk there.

Children's brochure is available there.

Campaign rules are available there.

Information about the first edition available there.

← ECOTIC and School Otherwise Public debate: The effects of the new sanitation law →