For two weeks, thousands of people from Oradea have been undergoing an environmental test. Included in the pilot program designed by the City Hall and RER West to improve the city's recycling rate, more than 6.000 locals have begun to dispose of biowaste separately, ie food and vegetable waste that can be turned into compost. 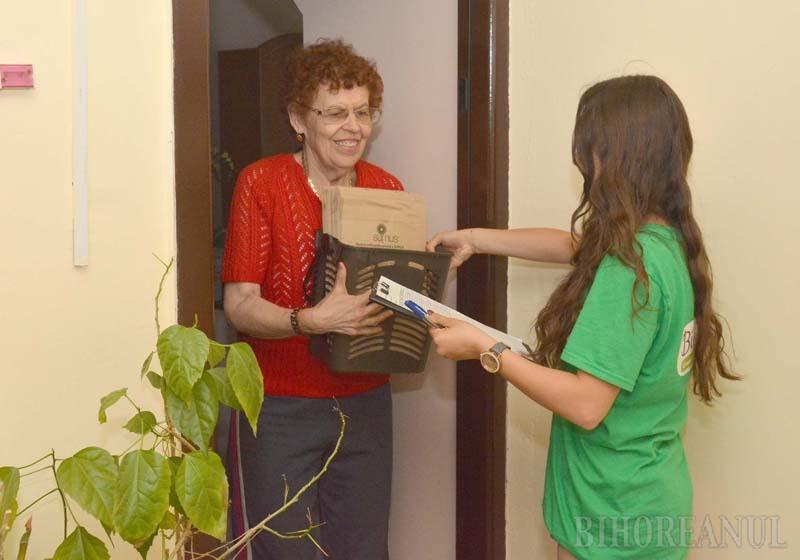 By the end of the month, an equal number of Oradeans will do the same, after they will also receive from the RER West the necessary containers for the collection of "green" waste.

The pilot program of selective collection in three fractions is applied by the municipality and by the licensed sanitation operator to 126 owners' associations, of which about 12.000 from Oradea belong. Conceived as a solution to reduce the amount of waste that the city sends to the green landfill, the program has simple rules. Instead of throwing the waste in two fractions, as all cocitadins have done so far, those included in the program divide them into three: the dry fraction (paper, cardboard, plastic, metal, glass, etc.), the biodegradable (fruit and vegetable waste). , egg shells, coffee or tea filters, flowers and plants, paper napkins and towels, animal hair and fur, meat, cheese and cheese), as well as the residual fraction, ie waste not falling into the other two categories.

As before, recyclable waste ends up in yellow bins, while residual waste must be dumped in black bins. Instead, for biowaste, the RER West equipped each of the 126 associations with brown bins.

The rules are explained to the people of Oradea, every evening, by the representatives of RER West and the City Hall. Citizens are informed of their meetings with flyers and posters placed on the stairs of blocks of flats, and at "meetings" find out the reason why this program is implemented: like all cities in the country, this year Oradea has the obligation to reduce 35% of the amount of waste it dumps in the ecological landfill, otherwise it will pay penalties for each ton of waste thrown over this limit.

In the last two years, the municipality has paid penalties of over 800.000 lei, money with which new parks or other facilities for citizens could be created. If it does not meet the target, it is easy to understand that the city will still have to send money to Bucharest, and even more, given that in 2019 the target will increase to 45%!

To avoid this, Oradea City Hall and RER Vest have prepared the pilot program based on studies and analyzes that show that in the trash of a family 33% are food scraps, 25% are paper, 16% is plastic , 10% are small unsorted scraps, 8% bottles, 7% vegetables and 1% aluminum. Therefore, 40% less waste could reach the landfill if the bio-waste is disposed of separately!

You recycle and you win!

The day after each meeting, the people of Oradea are expected on the stairs of the block by the RER West volunteers, who between 13 and 19 pm give them a trash can and 90 paper bags, in which to throw the biowaste in the 6 months in which will run the pilot program.

People also receive leaflets showing the rules of collection in three fractions. The citizens of Oradea who do not meet with the young volunteers will receive the baskets and paper bags from the presidents of the associations. Citizens should pay attention to the program, because the association that will collect the most bio-waste will be awarded by the West RER with the exemption from paying the sanitation bill for a year!

At the associations where the division of rubbish bins and paper bags was completed, half of the total of 126, the collection in three fractions started, and the workers of RER West found that there was room for improvement. More specifically, they noticed that in some brown bins the bio-waste was mixed with PET or even residual waste, which compromised the plant fraction, because it can be turned into compost only if it is not contaminated with other residues, which compromise fertilizer quality.

As the program is just beginning, the shortcomings can be remedied. The City Hall and RER Vest appeal to the citizens of Oradea, asking them to make the effort to dispose of the waste in the three indicated fractions. After all, it's a small inconvenience, but it will help the whole city a lot, starting with themselves…

(The article was initially published on the website www.eBihoreanul.ro https://www.ebihoreanul.ro/stiri/ultima-or-31-41/examenul-reciclarii-peste-6000-de-oradeni-au-inceput-sa-depuna-deseurile-in-trei-fractii-distincte-colectand-separat-si-resturile-vegetale-142375.html)

← Special guests and the latest technology documentaries at the second edition of the GreenTech Film Festival ECO JOURNALISM FOR A CLEAN ENVIRONMENT: A LESSON FOR EVERYONE, FROM THE MOST SUCCESSFUL PROMOTER OF BRĂILA →