The year 2015 in figures and actions: the ECOTIC retrospective 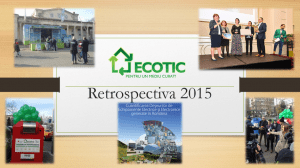 managed. Over 500 producers represented. Over 900 collection centers nationwide. The year 2015 brought the ECOTIC team many awards, many steps forward and a clear vision of the contribution to the development of the system national collection, recycling and recovery of WEEE and DBA.

The organization's figures continue to grow and show its strengths: the quality of services (the first WEEELABEX certifications appeared for the operators in our system), the excellent organization, the professionalism confirmed by the increase in satisfaction among producers, the seriousness.

But beyond the numbers, the ECOTIC organization has consolidated a vision of a field that is good to become open and collaborative. In other words, ECOTIC sought throughout 2015 to enter into partnerships that serve not only the organization, but the entire field of WEEE collection in Romania.

“One of the projects of this type marked a premiere in Romania: the study "Quantification of WEEE generated in Romania", made by the United Nations University, with the support of ECOTIC. It is the largest study ever conducted in Romania in this field. The study, presented publicly to the Ministry of Water and Forests, identified the real situation in which all those involved - public and environmental authorities, producer organizations, sanitation and recyclers - must adapt their policies and activities in the field. said Valentin Negoiță, President of ECOTIC.

Another important partnership of the year was the one with the City Hall of Sector 3, through which ECOTIC managed to implement the first street system for selective collection of small electricity at the level of Bucharest Municipality. So, from 2015, the people of Bucharest will find red WEEE collection containers, placed in the immediate vicinity of the traditional containers for paper, plastic and glass. You can follow the link above to see their exact location.

The year 2015 meant continuing efforts to increase the level of awareness and education of young audiences (especially children). ECOTIC caravan, a project with large European funding, once again managed to bring impressive results: 150 schools involved, over 100.000 visitors from 25 cities have already visited the well-known traveling exhibition with WEEE.

At the end of the year, the Clean Environment Awards Gala awarded environmental initiatives from a record number of registered and validated projects and initiatives, over 80, coming from all over the country.

← The First WEEELABEX Certifications in Romania! The new licensing order for collective organizations in public debate →