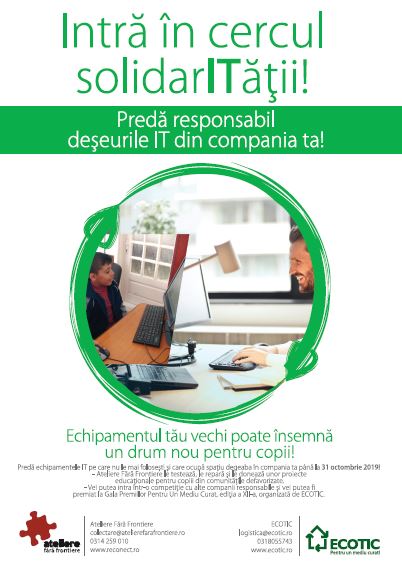 In Romania, a relevant volume of waste electrical and electronic equipment (WEEE) is generated, in which an important share is represented by IT equipment, respectively broken computers that can be reintroduced in the circular economy and can thus save important primary resources, preventing new activities. with a negative impact on the environment.

"In addition to the environmental benefits, the separate collection and recycling of electrical and electronic waste also has important economic and social values ​​arising from the recovery of raw materials and the reuse of reconditioned equipment by users from disadvantaged communities. Thus, many computers, after reconditioning, gain a new life through their use by schools, placement centers or NGOs.", Said Valentin Negoița, President of ECOTIC.

The need for IT equipment for schools in Romania continues in 2019, especially for those in rural areas and counties in less developed regions. Equipment requirements can be covered, including computer waste, to which a number of procedures can be applied to bring them back to life and reuse them.

In addition, it is already known that the environmental benefits are much greater when reusing waste, thus having a much lower environmental impact than simply recycling it.

In 2019, the Ateliere Fără Frontiere Association (AFF), with the support of Ecotic, aims to collect a significant amount of IT equipment waste that would lead to the recovery and reuse of over 2500 computers for schools in disadvantaged areas in Romania.

"In 2018, AFF collected over 120 tons of WEEE, from which it reconditioned in its social insertion workshop 2163 complete PC units, which it offered mostly to 174 schools with 34 student-beneficiaries. .Said Patrick Ouriaghli, general manager of the association.

In order to increase the number of reused equipment waste, Ecotic and AFF organize a national campaign among organizations that dispose of used IT equipment and thus generate WEEE, to hand over IT equipment waste, especially computers, to AFF to be repaired and offered schools.

The campaign is mainly addressed to companies that annually generate a relevant number of IT WEEE, respectively computers that are scrapped. Often this waste can become a problem by unnecessarily occupying storage spaces, and organizations of any kind have a legal obligation to manage this type of waste responsibly. Campaign partners Enter the circle of solidarity! they can offer efficient options with a low environmental impact, namely the collection for reuse and recycling of WEEE.

The companies or organizations that handed over the most computer waste will be awarded at the end of the year in the Awards Gala for a Clean Environment, the XNUMXth edition, organized by Ecotic, in two categories - SMEs and large companies, offering- visibility to the winners on all media channels of the mentioned gala.

Campania Enter the circle of solidarity! takes place between April 18 and October 31, 2019, at national level, and participants can register on www.reconect.ro and www.ecotic.ro

AFF is a Romanian non-profit organization, with the mission to achieve the socio-professional insertion of vulnerable people. During the workshop reattached, one of the AFF services is WEEE collection, with a focus on IT, offering the unique computer reconditioning service, subsequently offered to schools in marginalized areas. For more details send an email to colectare@atelierefarafrontiere.ro