Câmpiei Turzii City Hall, in partnership with ECOTIC and Greenweee International, are launching the most interactive information and collection campaign for electrical and electronic waste (WEEE), Recycling station.  In 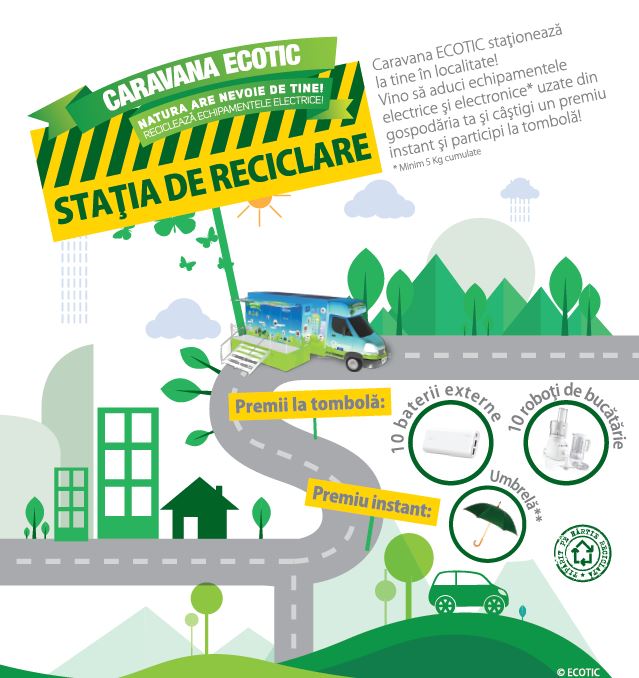 September 11-13, 2017, all the inhabitants of Câmpiei Turzii can bring waste to the ECOTIC Caravan, from refrigerators, washing machines, televisions or mobile phones and win prizes on the spot.

"Recycling Station" is a project launched by the ECOTIC Organization in June 2016 and dedicated especially to the rural environment, but also to the urban environment in Romania. After passing through the counties of Iași, Brașov, Argeș and Sibiu, Recycling Station reaches the city of Câmpia Turzii, with the help of the City Hall, the Local Council and GreenWEEE International.

In 2017, Romania has a mandatory national target for the collection of waste electrical and electronic equipment (WEEE) of 45%. In this context, the City Hall aims to support citizens with the most modern solutions to reduce the number of waste that reaches the landfill.

The ECOTIC caravan will be located in Tricolor Square, between September 11-13, 2017. The time interval for the campaign is 10: 00-18: 00 for each day of activity. To encourage the correct delivery for recycling of used electricity and electronics, each inhabitant who will bring to the collection point at least 5 kg accumulated of such waste will receive an instant prize and will be entered in a raffle with attractive prizes. The draw for the winners will take place on September 13, 2017, 18.00 p.m.

The Mayor of Câmpia Turzii Municipality, Dorin Nicolae LOJIGAN, declares: “I invite the community from Câmpia Turzii to participate in the ECOTIC campaign through active, conscious involvement in maintaining a healthy environment. Every inhabitant is our partner! ”.