"Recycling Station" is an information and waste collection campaign for electrical and electronic equipment (WEEE), launched by ECOTIC in June 2016 and dedicated especially to rural and urban areas in Romania. After passing through the counties of Iași, Brașov, Argeș and Sibiu, the Recycling Station is now in Ploiesti, in period November 10-14, 2017, with the support of Ploiesti City Hall, Rosal Prahova, Prahova INTERCOMMUNITY DEVELOPMENT ASSOCIATION and APM Prahova. 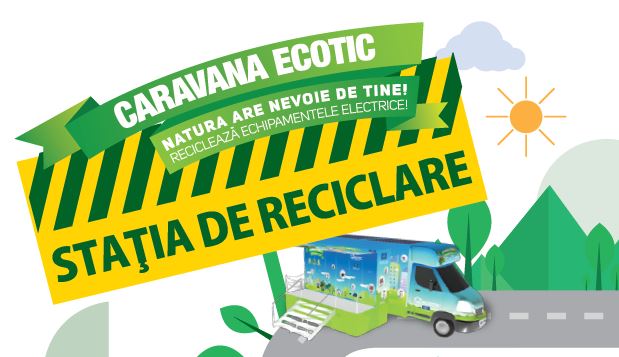 After passing through localities in Iași, Brașov, Argeș and Sibiu counties, as well as through Câmpia Turzii and Sector 1 of the Capital, the Recycling Station will also be stationed in Ploiești. To encourage the correct delivery for recycling of used electricity and electronics, each resident who will bring to the collection point in front of the Esplanade of the Civic Center near Mihai Eminescu Park at least 5 kg of such waste, will receive an instant prize and will be registered in -a raffle with attractive prizes.