Recycling Station, the itinerant ECOTIC campaign, dedicated to the collection of used electrical and electronic equipment from rural areas, continues its route in 2018. After crossing 2017 counties in 7, informing approximately 200.000 people and collecting 100 tons of WEEE (waste electrical and electronic equipment) , starting with March 15, 2018, the campaign “Recycling Station" started in Hunedoara county.  The second stage of the Hunedoara campaign begins on April 16, 2018. 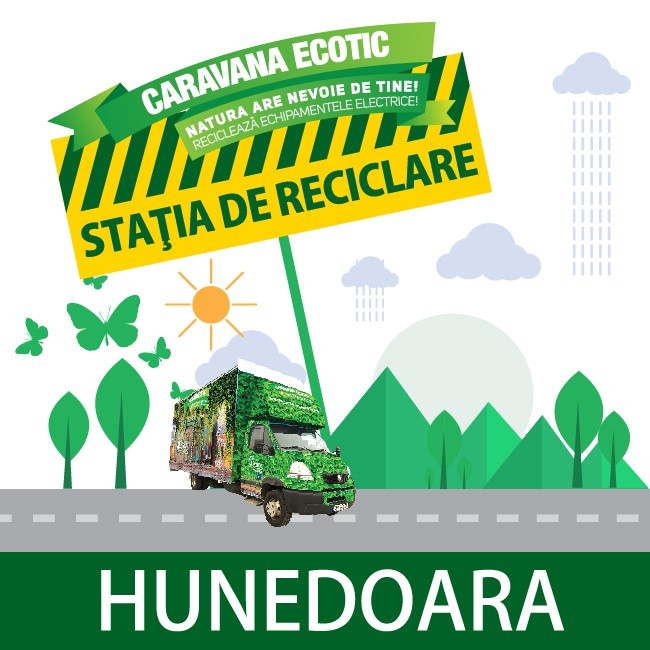 „Recycling Station" it is the ECOTIC campaign that pursues this objective mainly in rural areas. Together with local public and environmental authorities, ECOTIC informs residents of several localities in each county visited on the need to collect WEEE and provides a mobile collection point - Cravana ECOTIC - where this waste can be brought and handed over for recycling.

In 2018, the campaign continues in Hunedoara County, with the support of the Ministry of Environment, Hunedoara County Council and ADI Hunedoara. In the first stage of the Hunedoara campaign, five localities were visited: Gurasada, Dobra, Vețel, Băcia and Călan. In the second stage, five more localities will be visited, as follows:

To encourage the correct delivery for recycling of used electricity and electronics, each inhabitant who will bring to the ECOTIC Caravan at least 5 kg of such waste will receive an instant prize and will participate in a raffle with attractive prizes.