Dragos Calugaru, general manager of ECOTIC: "I supported the need for AFM to carry out controls on scrap metal collectors"

The interview presented below is given by the Director General of ECOTIC,

Dragos Calugaru, Ecologic magazine. This interview is available in no. 125 of the magazine, from August 2015.

ecological: You participated in a public consultation with the Administration of the Environmental Fund. What was it about and what were the conclusions?

Dragos Calugaru, general director of the ECOTIC Association: The meeting took place on August 5 and as far as I understood, only those who had a written point of view on this situation were called. Four collective organizations from the WEEE area, two from the DBA area, representatives of two producers, representatives of the Foreign Investors Council were present at the debate, and from the public authorities were present from the Ministry of Environment, Waters and Forests, from the National Guard. of Environment and of course from the Administration of the Environment Fund, including Mr. President Adrian Gearap.

The president of AFM proposed to discuss punctually the problems faced by this market, which happened. It was discussed about the modification of Order no. 196 regarding the AFM in which, besides the storage fees, some figures for battery waste and WEEE were highlighted, namely 2 lei penalty per kg for the unattainable target. We supported the need to substantiate this value, because this amount of two lei is unjustified and with an unassessed impact.

ecological: At one point the target was 4 kilograms of WEEE per capita. What is now the collection target for electrical and electronic waste?

Dragos Calugaru, general director of the ECOTIC Association: The target that belongs to the producers according to the new GEO no. 5 this year is 40% compared to what manufacturers put on the market on average in the previous 2 years and is valid from 2016. Practically from 2017, this penalty would apply.
And this is also true for battery waste, where we have a collection target of 45% compared to what was put on the market on average in 3 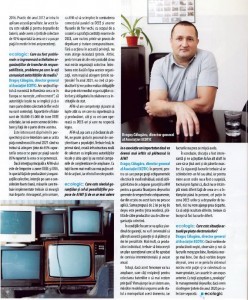 ecological: What were the problems that hinder the activity of the responsibility transfer organizations, problems that you communicated to the environmental authorities?

Dragos Calugaru, general director of the ECOTIC Association: I claimed that there is no such thing as "enforcement" in Europe, that local authorities are not involved and that most scrap metal collectors are not controlled. The official reports are of 30.000-35.000 tons of WEEE collected and we also have questions about some of them.

If the main intention of the AFM is to clarify the WEEE and DBA area, especially to producers and collective organizations, an intention that we consider very good, the measures that must be implemented must go further.

We have therefore suggested that the AFM be involved in combating trade in parallel with WEEE, namely scrap iron, in order to bring to the surface enormous amounts of WEEE that do not go through a process of depollution and proper treatment. Without acting in this regard, we will never reach our goals. Otherwise, in three years' time, there will probably be no more collective organizations. The question is whether, in the absence of these organizations, will we be able to achieve national targets? In 2021, I believe that producers will be able to fulfill their obligations only through collective organizations and mandatory in collaboration with state institutions.

The AFM, as it also stated, can help us in the process of raising public awareness. However, first of all, the real collection infrastructure must be created with the involvement of the local authorities and only then do the large-scale awareness campaigns make sense. We all do more or less such actions and their effect is positive.

ecological: What is the level of guarantees and penalties proposed by AFM? And why would an importer join an association if it becomes cheaper to pay to AFM?

Dragos Calugaru, general director of the ECOTIC Association: Currently, for those who place electrical equipment on the market individually, there is an obligation to submit guarantees to AFM to guarantee the financing of waste generated by those equipment, but as far as I know this does not really apply. The proposed amount of 2 lei per kg of waste is for the unattainable target, paid by the producer or by the collective organization.

In the conditions in which the guarantee order will be applied, it will not be convenient to pay this guarantee and to pay two lei penalty. Moreover, as an individual producer, you must draw up an operational plan to be approved by the inter-ministerial commission and approved annually.

However, if this phenomenon grows, how many containers for collecting batteries will we see in the country? We will reach a system similar to the Hungarian model where the state has monopolized this field and things do not move much there.

In conclusion, the discussion was interesting and we expect another draft in which our opinions will be taken into account. Certainly things must change in one way or another, and for me this order was not a surprise, precisely because, if nothing different happens from what has happened so far, at least in the area WEEE and battery waste, we won't even get too far. To get different results, you have to start doing things differently.

ecological: What is the current situation on the electronics market?

Dragos Calugaru, general director of the ECOTIC Association: If we talk about our producers, we also notice that things are going well. Romania is doing better. But if we talk about waste, what is taken over in our system is small and is collected with great difficulty and we have previously explained the causes. We are all waiting for a "revolution" in waste management, if we want to reach the 2020 targets on separate collection.