Positive evolution of the degree of awareness towards electrical waste 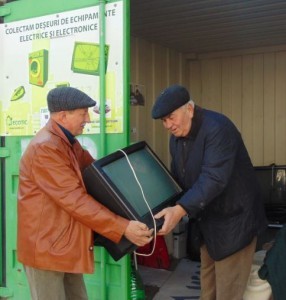 and electronic (WEEE) and DBA ”. The study was completed in May 2016 and is part of the ECOTIC Caravan project, a project funded by the LIFE + program of the European Union.

Two research reports were conducted - one in 2014, at the beginning of the project, and one in 2016, at the end of the project, in order to detect changes in behavior, attitude and information of the general public in Romania on selective collection and recycling of WEEE and DBA.

The figures show that a significant part of Romanians (41,3%) still have an unfavorable opinion regarding the current mechanisms of waste collection and recycling. Most consider that the solutions provided to the population are not enough and say that there is a need for several separate collection points in the locality, as well as the existence of local waste collection services.

At the same time, 26% of respondents spontaneously answered that WEEE is recyclable waste, a percentage increase compared to the results of the 2014 study. .

People are more willing to collect and hand over WEEE for recycling, being more aware of the buy-back systems in stores, of the fact that the delivery can be done in the store and through specialized companies. However, a quarter of respondents still do not know where such waste can be handed over.

There has also been an increase in awareness of WEEE components, both recyclable and hazardous to human health and the environment.

In conclusion, the study showed a positive change in the behavior, attitude and information of people regarding the collection and delivery of WEEE for recycling. However, there is a need for broader and stronger actions, especially from public authorities - local but also central - to develop much faster infrastructure for the collection of waste electrical and electronic equipment from the population.

The study was conducted on a representative sample of 1000 people from urban areas, with a maximum allowed margin of error of 3,1%.

← NEW MANDATORY REPORTS AND PAYMENTS TO THE ENVIRONMENT FUND ADMINISTRATION The First Clean City reports: at the end of the campaign, Botosani collected 3,4 tons of WEEE →