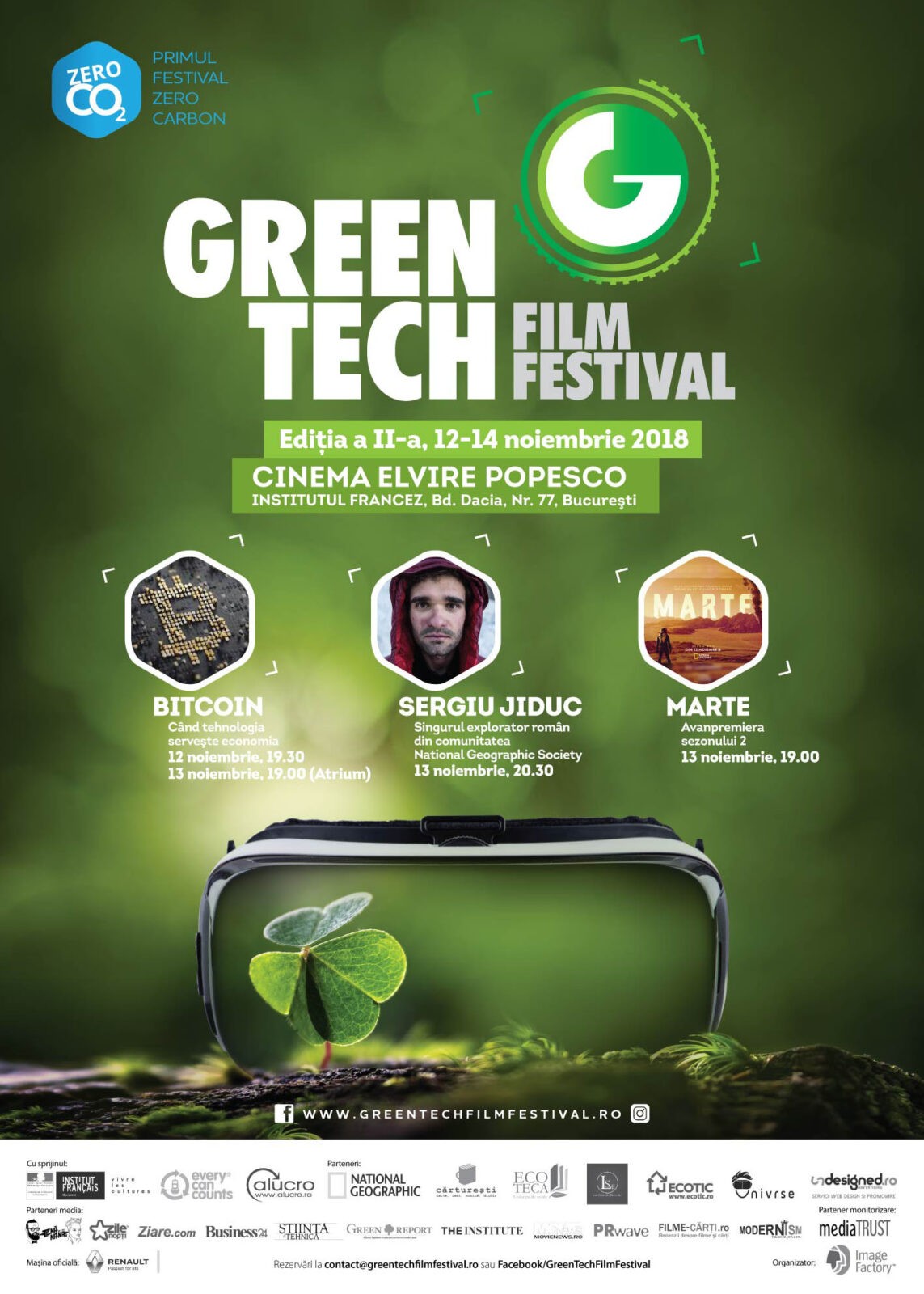 The second edition of the GreenTech Film Festival presents films and events with a theme green technologies and will take place during November 12-14, 2018, at the Elvire Popesco Cinema from Bucharest, and on November 20, in a special edition organized at the French Institute in Cluj-Napoca.

"GreenTech Film Festival is a unique event, held in a format in which both guests and selected documentaries are meant to help the general public better understand the impact that technology has on us, of the company. At the same time, the festival brings to the public's attention how innovation can solve environmental problems. " - declares Nicoleta Talpeş, from Media Image Factory, the festival organizer.

The second edition of the GreenTech Film Festival in Bucharest has as a special guest the only Romanian explorer in the National Geographic community, Sergiu Jiduc, currently based in London. Sergiu Jiduc will appear in front of the Romanian public on November 13, 20.30:XNUMX p.m., to talk about his experience as a researcher in earth sciences and an expert in sustainable development strategies.

The festival includes screenings of documentary movie which bring to the attention of spectators the image of mankind for over 25 years, as presented by the Israeli historian Yuval Noah Harari in "People, Gods and Technology", how online technology works ("The future created by us") and video creation ("YouTube, Vloggers and You"), But and the relationship between economics and technology. At the same time, the public will be able to watch preview of the second season of the documentary MARS, a National Geographic production, in partnership with producer Brian Grazer ("Apollo 13", "A Beautiful Mind") and director Ron Howard ("The Da Vinci Code", "Solo: A Star Wars Story"), which presents the scenario in which Earthlings become the first inhabitants of the planet MARS.

Relationship between technology and economy will be approached through the screening of the film "The Big Short ” ("The brokers of the Apocalypse"), followed by a Q&A, but also by presenting “When technology serves the economy. Cryptocurrencies: stakes and prospects " supported by Joëlle Toledano, professor of economics at the University of Paris Dauphine, in the presence of other Romanian specialists in economics.

They are also part of the program MiniGreenTech workshops, dedicated to students. They will be able to learn about the importance of recycling through demonstrations in which cans of aluminum, PET and textiles are transformed into reusable objects, but also about programming, robotics and virtual reality.

Details of the full program, tickets and reservations are available on the website www.greentechfilmfestival.ro, in the Program section, but also on the Facebook page www.facebook.com/GreenTechFilmFestival.