ECO JOURNALISM FOR A CLEAN ENVIRONMENT: Sălacea's "leaf"! The inhabitants of Sălacea commune are the only ones in Bihor who throw their waste in 5 different containers

Once every two weeks, on Fridays, in the Bihor commune Sălacea, the road traffic is blocked on every street. Luckily there aren't many drivers to fight back! 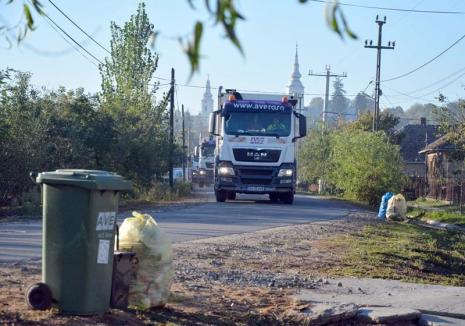 While the selective collection of waste proves complicated even for the citizens of Oradea, and in most Bihor villages the garbage ends up in forests and rivers rather than in the bins, in Sălacea the locals manage an enviable performance: they recycle 60% of the garbage produced. A county record, explainable by discipline.

Located 65 kilometers from Oradea, close to the border with Satu Mare County, Sălacea commune is among the few in the country where recycling is not unknown. For five months, in the two villages of the commune, Sălacea and Otomani, the selective waste collection has been implemented not in two fractions, as required by law, but in five. 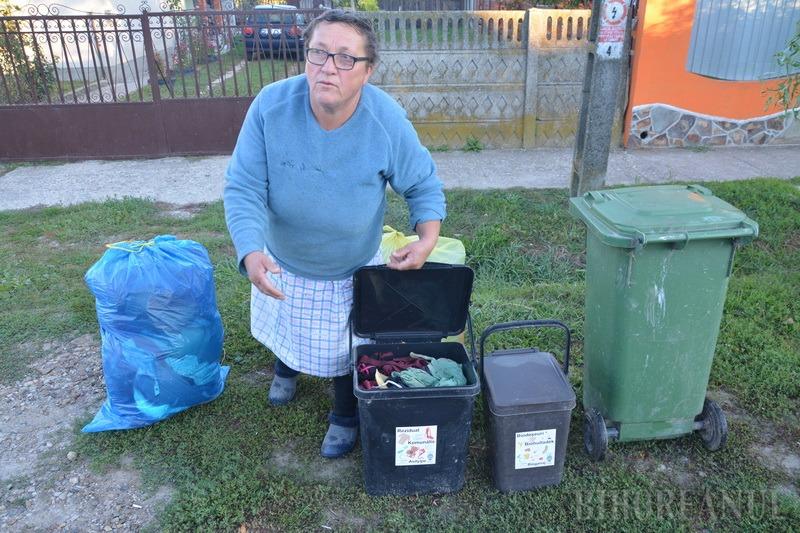 The villagers collect paper and cardboard, plastic, glass, bio-waste and residual waste separately, which cannot be reclaimed. "It's not easy, but if these are the rules, we follow them," says Mánya Margit (Photo), a local woman caught by the reporter just as she was taking out the trash in the street.

The implementation of selective collection in five fractions was suggested to the mayor of the commune, the UDMR member Horváth Belá, by Pásztai Zoltán, the director of Eco Bihor, who manages the ecological landfill of Bihor. Initially, Pásztai proposed to Oradea City Hall to adopt these rules, in order for the city to increase its recycling percentage, and Eco Bihor to increase the “production” of recyclables and, implicitly, the profit. As Mayor Ilie Bolojan did not like this "revolution", Pásztai approached the mayor of Sălacea.

"Together with the representatives of Eco Bihor and our sanitation operator, Ave, but also with the priests from the commune and the local councilors, we went on a working visit to Rogno, Italy. We have all seen how in a city with 5.000 inhabitants absolutely all waste is collected selectively. We said we should try, too, "says Horváth.

In his second term, Horváth Belá, just 30 years old, understood that the problem of recycling is complicated for rural areas. "We produced about 30 tons of waste per month. It costs us a lot not only the transport and storage at Eco Bihor, but also the taxes imposed by the Administration of the Environmental Fund ”. In addition, the mayor understood that it will not be long before, like cities, communes that do not reach their selective collection targets will be fined.

On paper, the locals from Sălacea selectively collected in two fractions, household and recyclable waste, but in reality few respected the rule. As a result, out of the 30 tons of waste produced monthly in the two villages of the commune, at most 0,9 tons, ie only 3%, could be revalued. The rest took the road to Oradea, to be deposited in the dump. Following the? The sanitation expenses of the City Hall exceeded 20.000 lei per month, Sălacea being among the few communes in Bihor that pays the sanitation service to an operator and subsequently recovers part of the money from citizens, in the form of a local tax of 5 lei / person /month. In most localities, sanitation companies bill their customers directly for the service provided.

How did the mayor manage to convince the villagers to collect the waste in five fractions, when they failed in even two? "It simply came to our notice then. We had several meetings, at school, at church, where I explained that if we don't make the change now, we will pay a lot, ”says Horváth.

The mayor's office provided the people with the infrastructure, paying about 20.000 euros for it. Each of the nearly 1.000 households received yellow bags for PET and metal, blue bags for paper and cardboard, a trash can for bottles, a container for biowaste and one for waste, which does not fall into any other category. They seem trivial, but plastic boxes are made to collect garbage. "If you put the lid on them, they have a locking system and, even if the stray dogs overturn them, the garbage does not spread on the street", explains the mayor. 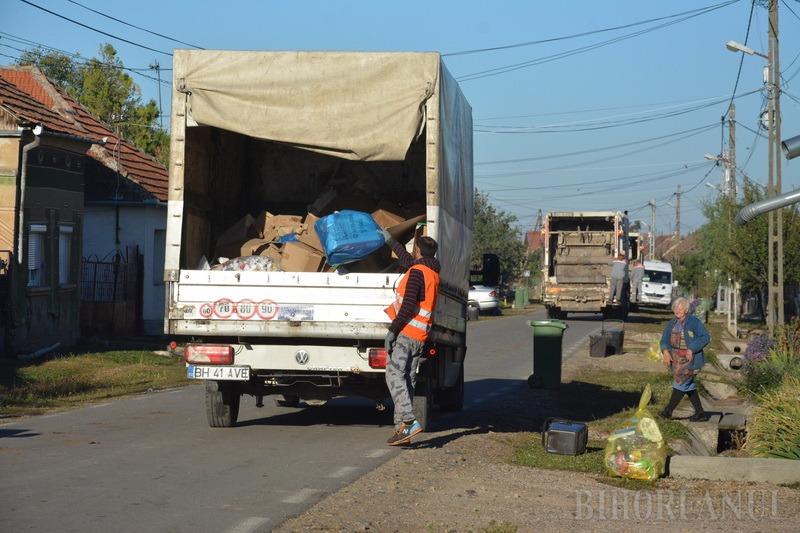 In addition, for biowaste, the people of Sălăeni received, free of charge, paper bags, as they also received from Oradea included in the pilot program of selective collection in three fractions.

In addition to containers and bags, Sălacea City Hall also distributed boxes in which to make compost. "Before, I used to find a lot of ash and even manure in the bins," says Horváth. He explained to the people that it was useless to throw this waste away and that it was better to put it in the gardens, as the forerunners did. "Our grandparents selectively collected more seriously than us," says the mayor.

And, also according to the Italian-Oradean model, the mayor arranged in both villages a separate collection platform, with containers for 12 types of waste, such as rubble, large objects or household appliances. "This is where the rubbish that would otherwise be in the fields ends up," says Horváth.

Double for the lazy

According to the mayor, it has become imperceptible how many of the 2.300 locals do not collect selectively. "There are three families in Sălacea and about ten in the Ottomans. They just don't want to, they told me that, "says Horváth. As punishment, everyone pays double for sanitation. "We decided in the Local Council that the tariff remains at 5 lei for people who collect selectively, but it is 10 lei for those who do not want to. You have the right to refuse, but you pay for it ", explains the mayor.

After the five months since he "revolutionized" the sanitation of the commune, he was convinced that he had made the right decision. "Today, 60% of our waste is reclaimed. We take about 15 tons per month to Eco Bihor, of which 6-7 tons of biowaste that becomes compost ", says Horváth. All other waste starts for recycling from Săcueni, where Ave has a sorting station, and the profit remains with the sanitation operator, motivated in this way to maintain low tariffs. And the City Hall has reduced its costs by half, now paying only 11.000 lei per month for sanitation.

It turns out, therefore, a system from which everyone has something to gain: the locals from Sălacea remain with a low sanitation tariff, the City Hall has low costs, Ave is chosen profitably from recyclables, Eco Bihor with the money from the compost sold. And the county with a successful model…

EXPORT MODEL
Bad for Bihor, good for others!

Convinced of the benefits of selective collection in five fractions, the mayor of Sălacea explained the system to his counterparts from other communes with UDMR mayors. "No one was interested in the subject," admits Horváth Belá.

Instead, both he and the director of Eco Bihor were wanted by the mayor of Carei, Kovács Eugen, who is thinking of implementing the collection in five fractions. "It is not wanted in Bihor, but other mayors have understood that it is necessary. We have a similar situation in Sfântu Gheorghe, where we also took care of the implementation ", says Pásztai Zoltán.

(The article was initially published on the website www.eBihoreanul.ro  https://www.ebihoreanul.ro/stiri/ultima-or-31-6-20/salacea-i-fruncea-locuitorii-comunei-salacea-sunt-singurii-din-bihor-care-si-arunca-deseurile-in-5-recipiente-diferite-144764.html)

← CLEAN CITIES: BUCHAREST, OCTOBER 27, 2018 Special guests and the latest technology documentaries at the second edition of the GreenTech Film Festival →