"Clean Cities", a new national campaign brand ECOTIC, dedicated to the collection of used electricity and electronics in urban areas, started on June 1, 2016, in Botosani. 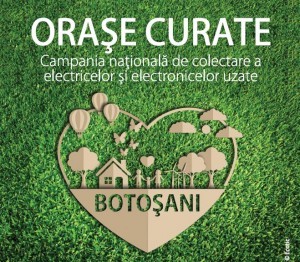 The ECOTIC organization, in partnership with the City Hall of Botoșani and Urban Serv, launched the campaign "Clean Cities: Botoșani", which takes place between June 1 and July 3, 2016. The people of Botoșani are informed and encouraged to become aware of the issue of waste electrical equipment and (WEEE) and the need to properly hand them over for recycling.

Thus, during the campaign, any resident of Botoșani who will hand over a waste of at least 10kg accumulated at one of the Urban Serv collection points, will receive an instant prize, within the available stock.

The campaign in Botosani is the first in the national program "Clean Cities", an itinerant program of the ECOTIC Organization, dedicated to WEEE collection in urban areas.

← The ECO raffle of Iasi came from CMCI! Circular Economy and Waste as Resources →