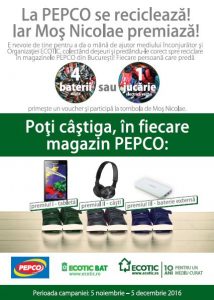 TIC carries out a campaign to collect used batteries and electrical toys in the network of PEPCO stores in Bucharest.

The inhabitants of Bucharest are informed and encouraged to participate in the collection of the mentioned waste, being able to teach in any of the 13 Pepco stores from Bucharest used batteries and electric toys.

Each person who hands over 4 used batteries or an old electric toy receives a voucher and participates in the Santa Claus raffle. The prizes for each Pepco store are:

Starting with 2016, the national targets for the collection of waste electrical and electronic equipment (WEEE) and waste batteries and accumulators (DBA) have become significantly higher. In this context, ECOTIC continues its efforts to develop partnerships in as many different areas as possible, in order to reach as wide an audience as possible and thus succeed in achieving its information, education and collection objectives.