"Recycling Station" is an information and waste collection campaign for electrical and electronic equipment (WEEE), launched by the ECOTIC Organization in June 2016 and dedicated to the rural environment in Romania. Brasov is the second 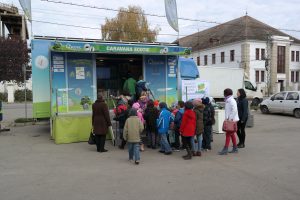 the county crossed by the ECOTIC Caravan, with the help of the Institution of the Prefect of Brasov County, Brasov Environmental Protection Agency and DEDEMAN.

After passing through the villages in Iasi County, the Recycling Station arrived in Brasov County. In period October 18 - November 1, 2016, the second stage of the campaign took place. The ECOTIC caravan stopped in 5 other Brasov localities (Ghimbav, Dumbravita, Bod, Harman and Sanpetru), collecting 6,3 tons of WEEE.

So far, the Recycling Station has passed through the localities of Moieciu, Bran, Zarnesti, Vulcan, Cristian (first stage), as well as Ghimbav, Dumbravita, Bod, Harman and Sanpetru (second stage). The inhabitants of the localities crossed by the ECOTIC Caravan were encouraged to hand over WEEE correctly and were able to participate, thus, in a raffle with attractive prizes. The third stage of the Brasov Recycling Station follows, with the following route:

Until the end of November, the ECOTIC Caravan will be visited by 15 Brasov localities.

← PEPCO and ECOTIC recycle! And Santa Claus rewards! GIVE LIFE TO NATURE WITH A GOOD IDEA! November 21 - December 9 →