Recycling Station is an information and waste collection campaign for electrical and electronic equipment (WEEE), launched by the ECOTIC Organization in June 2016 and dedicated to the rural and urban environment in Romania. After crossing the counties 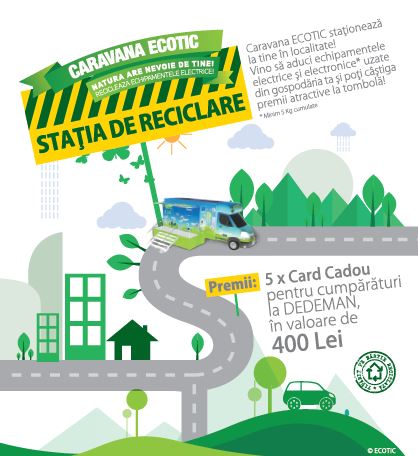 Iasi and Brasov, The Recycling Station also starts in Arges County, starting from March 20 2017, with the support of the Arges County Council, the Arges Environmental Protection Agency and ADI Servsal.

Starting with 2016, Romania has a mandatory national target for the collection of waste electrical and electronic equipment (WEEE) of 40%. In this context, the ECOTIC Organization launched, in 2016, two national campaigns - one dedicated exclusively to the urban environment (Clean Cities) and one dedicated to both the rural and the urban environment (Recycling Station), both meant to cover as well as possible. the territory of the country and to send the message of the need for the correct collection and recycling of WEEE to a wider public.

After passing through 30 localities in Iasi and Brasov counties, Recycling Station will arrive, starting with March 20, 2017, in Arges County. The first localities visited will be Mioveni (March 20-22), Titesti (March 23-25), Schitu-Golesti (March 26-28), Campulung (March 29-31) and Leresti (April 1-3). Until the end of the campaign, the ECOTIC Caravan will visit 15 localities in Arges.

For the collection of bulky waste from home, the inhabitants of the targeted localities can call 0784.274.341.

The campaign launch conference will take place on March 16, 2017, at 10:00, at the headquarters of the Arges County Council.

More details about the project there.