Between July 24 and 31, ECOTIC organized with the support of Craiova City Hall, Dolj Environmental Protection Agency, Dedeman, REMATHOLDING and Recolamp Association, a new campaign to raise awareness and collect waste electrical and electronic equipment and incandescent bulbs and neon lights, called "Recycling Days in the city of Craiova!". The campaign was part of a series of 30 local campaigns that are carried out nationally and are generically entitled "Recycling Days in your city!". These campaigns are part of the “ECOTIC Caravan” project, a project developed by the ECOTIC Association through the contribution of the LIFE + instrument of the European Union.

By implementing this campaign, ECOTIC aims to help reduce the risk of climate change by raising awareness about the recycling of Waste Electrical and Electronic Equipment (WEEE).

The presence of representatives Dolj Environmental Protection Agency and media representatives at the opening event on July 24, he stressed once again the involvement of these entities in actions dedicated to raising public awareness of environmental issues. The people of Craiova responded promptly to the eco-messages sent by the organizers, handing over 1.000 kg of WEEE to the Caravan. ECOTIC will ensure that all waste electrical and electronic equipment collected separately and handed over responsibly in this project will follow the correct course of recycling.

In those 8 days of campaign (24 to 31 July), the inhabitants of Craiova were able to visit the ECOTIC Caravan, a mobile exhibition, on 4 wheels, of waste electrical and electronic equipment.

Over 1.000 inhabitants and tourists from Craiova they visited the caravan located in William Shakespeare Square (Esplanade of the National Theater "Marin Sorescu") and handed over waste electrical and electronic equipment, as well as light bulbs and neons. 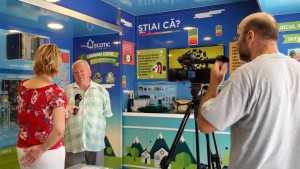 The winners drawn from the WEEE section of the raffle are:

The winner drawn in the section related to economic bulbs and neon lights in the raffle is: Suserea Nicolae

Part of the "ECOTIC Caravan" project is also the program dedicated to schools, "ECO days in your school!”. Within this program were visited between November 13, 2014 - June 09, 2015, 104 schools in Bucharest, Slatina, Alexandria, Giurgiu, Targoviste, Ploiesti, Brasov, Adjud, Bacau, Piatra Neamt, Suceava, Radauti, Dorohoi, Botosani, Iasi, Vaslui, Barlad, Focsani, Braila, Galati and Buzau and by June 2016 a number of fish will be reached 200 schools nationally.

The presentation film of the caravan is available here: https://www.youtube.com/watch?v=oEkxiZKXrNo. 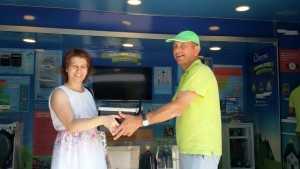 ECOTIC is a non-profit collective organization that manages waste electrical and electronic equipment (WEEE) on behalf of over 500 affiliated manufacturers and importers. ECOTIC ensures and supervises the entire process of taking over, transport, dismantling and recycling so that, in the end, WEEE is no longer a danger. Over 61.000 tons of WEEE were managed in the ECOTIC system, in the 9 years of activity. Prompt and specialized consulting offered to manufacturers of electrical equipment, batteries and accumulators is a defining element of ECOTIC. More details can be found on www.ecotic.ro, on the dedicated Facebook page ECOTIC organizationas well as on LinkedIn 's LinkedIn page ECOTIC organization.

The LIFE + program is an instrument of the European Commission that finances projects that contribute to the development and implementation of environmental policy and legislation. This program especially facilitates the integration of environmental issues into other policies and more generally, participates in sustainable development. The LIFE + program replaces a number of financial instruments dedicated to environmental protection. More details can be found on http://ec.europa.eu/environment/life/funding/lifeplus.htm.

← ECOTIC came up with an efficient information circuit for WEEE collection Dragos Calugaru, ECOTIC general manager: "I supported the need for AFM to carry out inspections on scrap metal collectors" →