The Recycling Station is an awareness camp 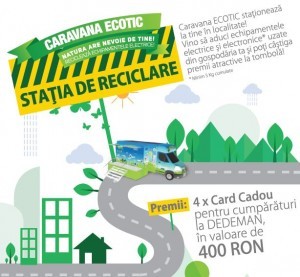 aign that focuses on WEEE collection, launched by ECOTIC in June 2016 and dedicated to Romania’s rural environment. Brasov is the second county that ECOTIC's Caravan traveled to, with the support of Brasov's Prefecture, the Environment Protection Agency Brasov and DEDEMAN. The third stage takes place during November 16 - 30, 2016.

After spending time in the villages of Iasi County, the Recycling Station arrived in Brasov County. During November 16 - 30, 2016, the third stage of the campaign unfolds. ECOTIC's Caravan will make stops in other 5 rural localities: Sacele, Tarlungeni, Budila, Teliu and Prejmer.

Until now, Brasov Recycling Station made its way through Moieciu, Bran, Zarnesti, Vulcan, Cristian (first stage), as well as Ghimbav, Dumbravita, Bod, Harman and Sanpetru (second stage), collecting over 10 tons of WEEE. People were encouraged to correctly hand over WEEE, thus being registered for a raffle with attractive prizes.

The schedule of Stage III is as follows:

By the end of November, the ECOTIC Caravan will have visited 15 rural localities in Brasov County.

← REGISTRATIONS CONTINUE FOR THE “THE CLEAN ENVIRONMENT AWARDS GALA” COMPETITION The city of Iași continues to recycle: the autumn campaign of the Iași Municipal Collection Center (CMCI) presents its results →