Rematholding Co SRL, one of the largest Romanian companies in the field of waste management and Redux GmbH Germany, the largest company for processing and recycling waste batteries and accumulators in Europe, concluded on Wednesday, April 10, a partnership agreement on recycling these types of waste. The event took place in the conference room of Pavilion C4 ‐ C5 in the Romexpo Exhibition Complex, within the International Exhibition for

Technologies and Equipment for Environmental Protection, ROMENVIROTEC 2013. The event, held in partnership with the Ministry of Environment and Climate Change marks the beginning of an official collaboration between two companies with a tradition in the field of recycling and confirms once again the commitment that Germany and Romania show in the direction developing bilateral relations in terms of environmental protection and modernization of the waste management sector.

"The signing of this partnership is part of Rematholding's strategy to provide solutions to European standards for the flow of waste batteries and accumulators in accordance with Romania's obligations under Directive 2006/66 / EC and subsequent national legislation," said Mihai Sofian, President of Rematholding. 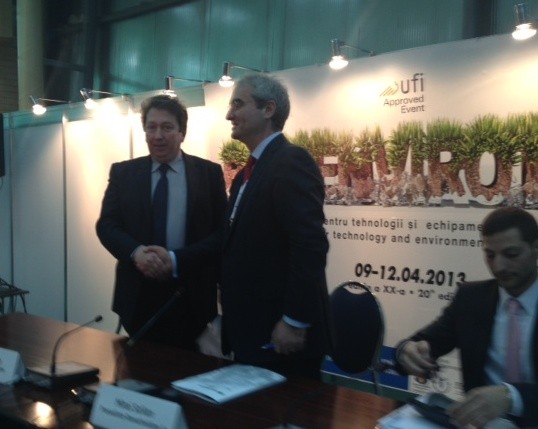 Through this agreement, Rematholding and Redux provide partners with an efficient solution in the field of collection and recycling of used batteries and accumulators to the highest European standards, using the latest technologies in the field, which allows Romania to achieve its goals in in accordance with European Directives. The event will be opened by Mr. Horia Irimia, Vice President of ANPM, representative of the Ministry of Environment and Climate Change and by Mr. Bela-Nikolaus Buzasi - Economic Attaché of the Embassy of the Federal Republic of Germany.

The press release is available here

← Conference “Towards a European waste management. National Waste Management Strategy 2014 - 2020 "organized by the Chamber of Commerce and Industry of Romania Steps to revise the European Battery Directive (66/2006) →