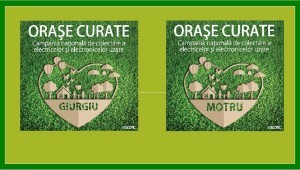 The campaign started in Botosani with very good results (3,4 tons of WEEE collected) and continues, in October, in three other cities in Romania. In turn, the inhabitants of Giurgiu and Motru will be informed and encouraged to properly hand over the used electrical and electronic equipment at the collection points of the local sanitation partners.

The program of the Clean Cities campaign, further, in October, is the following:

← The School of Ecoterrians has been launched! Ecoterrienilor School - campaign in schools (2016-2017) →