ECOTIC participated on June 11, 2015 in the Debate on Sectoral Measures and Institutional Obligations for streamlining the policy of separate collection and recovery of WEEE, organized at the initiative of the Institute for Public Policies (IPP), which was joined by the RECOLAMP Association.

The debate aimed to bring to the attention of stakeholders - public authorities with competences in the field, takeover organizations and EEE producers - a number of issues considered less functional today in the flow of WEEE recovery, which is a problem. important for the environment because of the hazardous substances they contain.

The discussions were centered around 4 major topics, to which the participants brought numerous arguments / examples / proposals to improve the current situation:

The participants in the debate formulated a series of proposals that address the aspects considered most vulnerable at present in terms of WEEE flow:

- Improving procedures control at the level of the Environmental Guard by carrying out collaboration protocols with the fiscal authorities or with the AFM, in order to verify at the producer / collective organizations, not only the reports, but also the input data, the accounting records, etc. (as is currently the case with the control of the waste transfer phenomenon, in which case the Environmental Guard and the Customs Police work together);

- Establishment of a type economic instrument sanction, similar to that of packaging, which penalizes producers who do not correctly declare the quantities of EEE placed on the market, with a fixed value per kg. The penalty should also be applied to those who do not meet their proposed targets through approved operating plans.

- Control of EEE data placed on the market, reported by manufacturers. As the collection and recycling target is directly proportional to this data, it may encourage some to declare smaller quantities in order to have smaller targets. But, in this situation, the protection of the environment is not ensured, there being "orphan" waste in the market, for which no one assumes the responsibility or the costs. Moreover, this situation, in which not all producers correctly assume their responsibilities, does not ensure a fairly competitive market.

- Control of the activity of liability transfer associations, application of fines if they do not fulfill their legal obligations / do not report correctly / do not reach the targets starting with 2016, which will lead to increased collection and elimination of the current phenomenon in which, from due to the fact that there are organizations that do not collect WEEE at the declared level and do not have real costs, they can afford a very low Green Stamp and attract producers exclusively based on the value of the green stamp and not the performance.

The participants of this event were representatives of the Ministry of Environment, ANPM, Environmental Guard, Competition Council, parliamentarians, as well as representatives of collective associations in the field of waste management, representatives of EEE Producers and WEEE collection and recycling operators.
ECOTIC, through its representative at the debate, Mrs. Economic Director Gabriela Serban, expressed her support for transparency and fairness in reporting to the Authorities, as well as control by the competent bodies, both collective organizations and EEE producers who manages individually the obligations regarding the management of WEEE and last but not least of the operators of collection and recycling of WEEE. 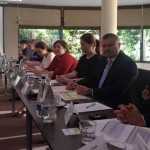 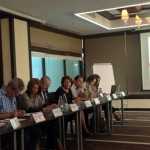 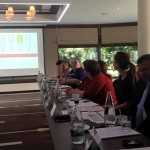