Clean Cities, the ECOTIC itinerant campaign, dedicated to the collection of used electrical and electronic equipment in the urban environment, develops a new component dedicated to the rural environment - CLEAN COMMON. Following the same type of approach and mechanism, the campaign will start in the period April 23-27, 2018,  in Valea Lupului locality from Iași county. 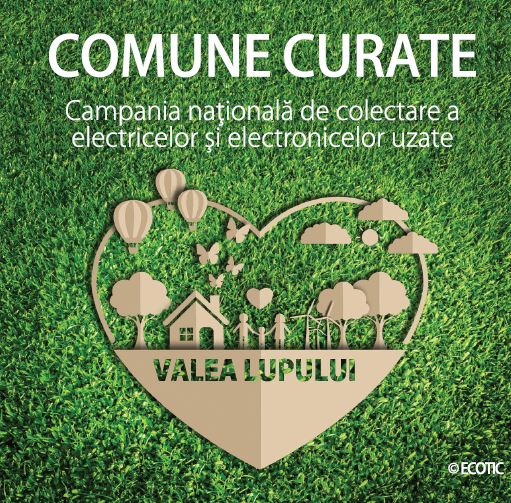 Thus, starting with April 2018, the traditional campaign of ECOTIC, "Clean cities", a campaign aimed at raising awareness in the urban environment, will develop a component dedicated to the rural environment, under the name of CLEAN COMMON. Together with local public and environmental authorities, ECOTIC will inform residents and rural areas across the country of the need to collect WEEE and provide collection points where this waste can be brought and handed over for recycling.

In 2018, the campaign starts in Valea Lupului commune, Iași county, with the support of the Ministry of Environment, Valea Lupului Commune City Hall, APM Iași, ADIS Iași and ECOREC RECYCLING. Between April 23-27, 2018, the inhabitants of Valea Lupului are encouraged to hand over correctly for recycling waste electrical and electronic equipment (WEEE).

Thus, during the campaign, any inhabitant of Valea Lupului who will hand over a waste of at least 5kg accumulated at the specially arranged collection points, will receive an instant prize. The collection points are located as follows:

For the collection of waste of large and bulky electrical and electronic equipment, you can call the phone number 0747 412 240. An ECOREC team will travel and collect WEEE from home, on April 27, 2018.