The results of the "Recycling Invitation!" sent by ECOTIC, CCIFER and Ateliere Fara Frontiere to the Romanian business environment

Between September 27 and December 9, 2016, ECOTI Organization 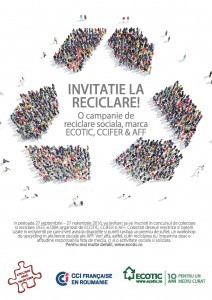 C, CCIFER and Ateliere Fara Frontiere have launched an invitation to CCIFER members to participate in a competition for the collection and recycling of waste electrical and electronic equipment (WEEE) and waste batteries and accumulators (DBA). 10 companies responded to the invitation and entered the contest, collecting 1,3 tons of WEEE.

Campaign-contest "Invitation to Recycling!" is the result of the partnership between ECOTIC, CCIFER and Ateliere Fara Frontiere, in the context in which there is a real need to inform the public on the need for collection and recycling in Romania. The campaign was addressed to the business environment - CCIFER members, and the collection of electrical and electronic waste and used batteries and accumulators was done by Ateliere Fara Frontiere.

The ECOTIC organization has been implementing WEEE and DBA information and collection campaigns for 10 years, managing since 2015, for the first time in Romania, to reach the mandatory national target of 40% for WEEE collection, valid starting with 2016. ! ” is part of the ECOTIC strategy to reach as diverse audiences as possible, in partnerships that expand the organization's field of action and information.

The companies that collected the largest amounts of WEEE and DBA were awarded a workshop at Upcycling Corner - a concept of Workshops Without Borders, a good opportunity for companies to discover that recycling is not only a responsible attitude towards the environment, but also a social and solidarity activity. The winners of the campaign are the Law Firm Gruia Dufaut and Yves Rocher Romania. 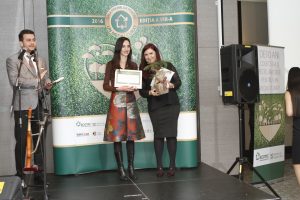 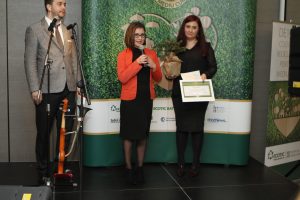 ← Episode 4: Other business models in the circular economy The ECOTIC "Clean Cities" campaign arrives in Galati →