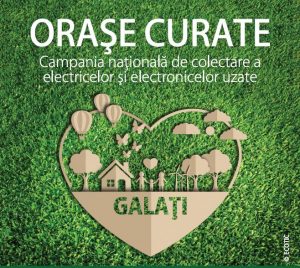 an Cities ”put on Romania’s map in 2016 by ECOTIC’s national campaign dedicated to WEEE collection in urban areas. The objectives of the campaign are to inform the general public on the need to correctly hand over WEEE for recycling, as well as to effectively collect used equipment.

The campaign started in Botosani and continued in October 2016 with three other Romanian cities: Drobeta Turnu Severin, Giurgiu and Motru. During December 12 - 16, 2016, the citizens of Galati were informed on how to correctly hand over used electrical and electronic equipment to the collection points set up by local sanitation partners.

The citizens of Galati were encouraged to take part in the campaign by the availability of instant prizes awarded to those who handed over a cumulative quantity of minimum 5 Kg of WEEE. 1826 kg of WEEE were collected from over 100 person.