After the launch, in May, of the "CLEAN CITIES" campaign - a project 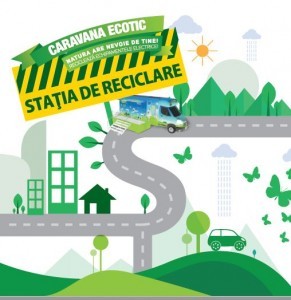 t itinerant collection of waste electrical and electronic equipment (WEEE) in urban areas, ECOTIC launches a campaign dedicated to rural areas. The "Recycling Station" offers a new start to the ECOTIC Caravan, which will pass through the villages in Iași County and will encourage people to hand over old electrical equipment.

The campaign will start on June 14-15, 2016, when the ECOTIC Caravan will stop in Ciurea Commune, Lunca Cetățuii village, Iași county. Residents will be informed about the presence of the Recycling Station in their locality and will be encouraged to hand over WEEE, by organizing a raffle with inspired prizes: a brushcutter, two egg incubators and three kits with different tools can be won by those who will teach at least Cumulative 5 kg of waste electrical and electronic equipment.

The route of the Recycling Station, in June, is as follows: