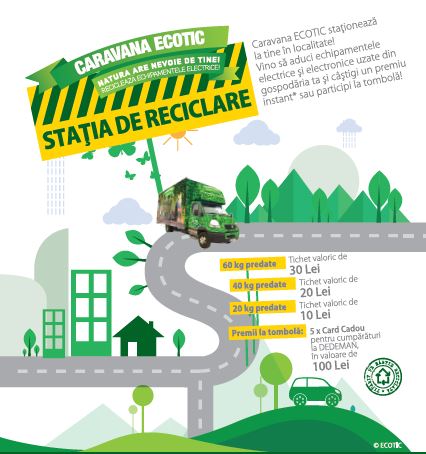 „Recycling Station" is the ECOTIC campaign that pursues this objective mainly in rural and small urban areas. Together with local public and environmental authorities, ECOTIC informs the inhabitants of the localities in each county visited about the need to collect WEEE and provides a mobile collection point - Caravan ECOTIC - where this waste can be brought and handed over for recycling.

Between July 23 and August 6, 2019, ECOTIC, with the support of the Timiș Environmental Protection Agency and the Timiș Waste Intercommunity Development Association, is carrying out the second stage of the campaign, visiting five localities, according to the following program:

Taking home bulky equipment (TV, refrigerators, washing machines) is free based on telephone appointment at the phone number 0732.148.550 between 10:00 and 17:00 or directly at the Caravan. The appointment will be made on the first day of the campaign in each locality.

Romania, as an EU member state, has the obligation to reach a target of 45% collection of waste electrical and electronic equipment (WEEE) by 2020. In this regard, ECOTIC continues its efforts to raise awareness among the population.