The winners in the category of Companies within the Awards Gala for a Clean Environment, 2016 edition, are those from Studio Plot with the TUBATECT project. I learned more about the project and future plans from Adrian Ibric, Chief Designer. 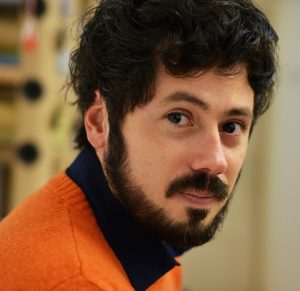 You are the winners of the Grand Prize for Companies category at the 2016 Clean Environment Awards Gala. What does this award mean to you?

AI: The award was an extraordinary surprise for us, in the sense that, although we are proud and attached to the TUBATECT project, to the fact that it has a very positive impact on the environment, we are aware that we do not promote it enough and we could not scale it. so far to have an increased effect, outside our community of designers, architects and our close clients. Consequently, winning the competition, which we have been pursuing since the past years, we consider a new turning point in the development of this initiative and the opening of the project to new groups of potential users and promoters of recycled objects, with direct effect on the impact in society. use of upcycling and through additional environmental education. Equally, we see the award not only a certification of the effort made, not only an image upgrade but also an impulse to continue the responsibility, ours and those around us.

How did you come to develop this project?

AI: The tubes were among the first and most voluminous wastes generated by our company, whose main activity was the printing-plotting center. The tubes are the support on which the paper wrapped in rolls comes. As architects, we are educated to see the potential in everything, from arrangement, construction, deconstruction, to the intelligent and efficient use of space and resources. So I kept the tubes for this potential, without having a specific idea of ​​what we were going to do with them. We have this approach with other waste, our friends tell us that we are too "collectors" for our own good. However, I could not throw them away. At one point, I filled a room with them and they began to become a "problem." Then, we had to find a solution and we started experimenting, culminating with the arrangement of a new work point with furniture (table frame and tubing - tube shelf). Clients and friends reacted immediately and the development of our project is due to them, because their support is very motivating and responsible. In retrospect, this was the first major turning point.Subsequently, the range of objects increased, in parallel with our visibility in the media, in the market. We did not focus on the service, on obtaining money, but on its environmental impact, on education, considering it artistic rather than business. I did an industrial design opening, some workshops, presentations at furniture exhibitions and eco fairs. The project was beginning to mature and I was at a time when it was a "sin" not to develop.At the end of 2015, we started to look at it as a business, separate from the one at the printing center. It was another major turning point. I hired an EXCLUSIVE collaborator for the upcycling project and the TUBATECT brand appeared, I made the first logo, facebook page, etc. Until then, I had tried different names and on the human resources side, I put my shoulder on everyone when I had a little free time. In the second half of 2016 we developed the website and continued to produce new bodies. We started a new partnership to promote the brand.

How was the project received by the general public? Did they understand the message behind these unique objects?

AI: I used to say that it is very important to support the public, because we see it as very loaded with ecological significance. Probably everyone who feels ecological thinks so, but we really believe that our effort, small and punctual, will have an impact, through the Bulgarian effect. Educational and spin-off type. I still remember when a client from the prince came to present me with a lighting fixture made of tubes. He had seen what we were doing and went on. We also ordered a lamp for ourselves and we were very pleased with this follow-up. The support of the general public is limited only by the scale at which we made known the project and its environmental values, there is an enthusiasm that is not limited only to professionals, NGOs or environmentalists. We want a greater institutional interest, in the sense that our example generates the support of the authorities to other similar initiatives.

What are your goals for the project this year?

AI: For us, the year 2017 started in December. We are working on a project development strategy, for the first time, in line with the business approach adopted in the previous year, but not in the sense of strictly financial efficiency, but integrated with public education on environmental issues (anyone can be a potential customer later). One important goal is to grow the team, especially on the side of promoting and attracting other types of clients, respectively we study the financing possibilities in Romania such as CSR - and we promote this attitude among all such initiatives because we trust the quality offered by the competition. We are interested in collaborations including external on environmental programs, research, as a source of funding, given that, at the national level, support has been limited so far. As a PhD student on environmental and ecosystem systems, I am looking for links with national and international research projects in the field.

What would be the message you would pass on to the new generation regarding the attitude towards the environment and towards reuse?

AI: Simple. Waste is a resource. From the data point of view, I have the intuition that in the medium and long term it is cheaper, healthier, more sustainable for a nation to recover its raw material from waste. Sweden imports garbage from its neighbors. In the short term, efficiency procedures can be found. We need waste collection and separation, we need support from everyone and we also need monitoring, collection and updating of data on all these initiatives for promotion and awareness. Little by little from each makes a big, one more, one much more.