The ECOTIC Recycling Station continues its journey in Arges County! 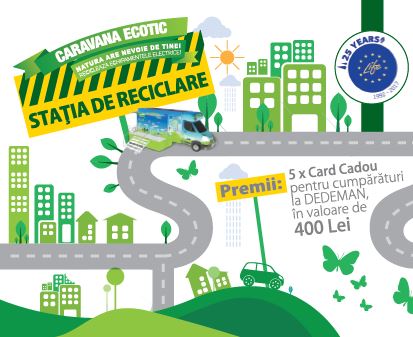 electronic (WEEE), launched by the ECOTIC Organization in June 2016 and dedicated especially to the rural environment in Romania. After crossing the counties of Iasi and Brasov, The Recycling Station continues its route through Arges County, carrying out the third stage in the period 17 - 31 May 2017, in partnership with ADI Servsal,, Arges Environmental Protection Agency and Arges County Council.

After passing through localities in Iasi and Brasov counties, the "Recycling Station" arrived, starting with March 20, 2017, in Arges county, proposing a new program, in three stages, for the collection of used electronics. The localities visited during the first stage were Mioveni, Titesti, Schitu-Golesti, Campulung and Leresti. In the second stage, just completed, the ECOTIC Caravan passed through Domnesti, Buzoesti, Costesti, Topoloveni and Leordeni.

Between May 17 and 31, 2017, the "Recycling Station" will enter the third stage of Arges, visiting the following localities:

Residents who will correctly hand over at least 5 kg of accumulated waste electrical and electronic equipment will participate in a raffle.

The ECOTIC caravan will be stationed in Pitesti on the occasion of the 25th anniversary of the launch of the LIFE Program of the European Union, in order to celebrate the major contribution of this platform to the protection of the European natural heritage.

← Together, IT IS POSSIBLE !: IT equipment donation campaign ECOTIC campaign "Clean Cities" in Brăila →