Episode 1: What is the circular economy?

We start a series of articles dedicated to some aspects that we consider important in the current dynamics of the evolution of the environment in which we live. The world is changing and the need to protect the environment is becoming more and more acute. It is a turmoil that has pushed governments and strong institutions to devote more and more time to the analysis of the situation we are in and to the generation of possible solutions.

ECOTIC is an organization that has been active in the field of waste management of electrical and electronic equipment (WEEE) in Romania for 10 years, and this activity has brought us closer or put us in contact with many realities, information and facts related to the environment. , the impact of the economy and political decisions on it. 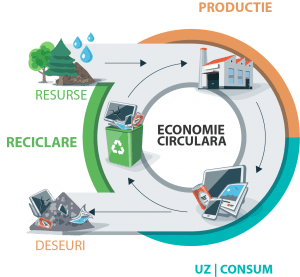 For years now, a concept has been circulating in European and world decision-making circles, which is not so new, but which is only now beginning to gain due visibility and attention: circular economy.

In the simplest words, the circular economy is an economy that produces zero waste. It is a new paradigm, an economic circuit in which, from the design phase, everything is designed in such a way that what enters a product or process, falls into two categories: either it is a biodegradable component, or it is a component with 100% recycling potential.

The implications of such a definition are huge. But such a huge change is needed to succeed, at the level of humanity, in reversing some of the trends that economists and sociologists have identified.

Resources are drying up and thus becoming more and more expensive.

In the current paradigm of the linear economy, the processes are quite clear. It is what is called a "take-make-dispose pattern": companies extract or buy raw materials, which go into the manufacture of products that they sell to consumers, and they use them until they no longer need them. In other words, more and more resources will be needed, and the planet's deposits are not unlimited.

Economists have identified the risk and accelerated growth of the real price of products in the last 10 years, and the conclusion was clear: we all have an interest in getting out of this trap of linear consumption.

Companies need to no longer be dependent on raw material suppliers and no longer have high economic risks. The population needs products and services at fair prices, made in a way that transforms the person from the consumer into the user. The environment and the planet need a breath of fresh air, a break in the continuous and sometimes reckless exploitation of natural resources.

In a system where profit is still produced, things have a natural tendency to stagnate. Now, imagine what it would mean for human civilization to change perspective and methods in the economic model. What a boom! Of course, no one wants a change for the sake of change, but we are talking about a change necessary for our future on this planet.

What this means? It means that people are used, in the current economic model, to own, to have, to use and then to throw. Again and again. But the question now is: will we have where to get it in 20-30 years? How much will it cost, in financial and environmental impact terms, just to consume and not to develop a system that recovers what we generate from consumption?

We leave you with a series of questions. These are serious, acute questions, questions meant to open our eyes to such a vast and demonetized concept, but ultimately vital: our future.

← A new raffle at the CMCI! End of stage: The ECOTIC caravan goes on! →